The other was a foreign exchange student who thrived on travel and wanted to roam the world capturing stories as a photojournalist.

But in the blink of an eye, they were gone.

The lives of Colerain High School junior Miranda Lane and her passenger, junior Mathilde Jessen, were cut short 4:15 p.m. Thursday when Miranda failed to yield at a stop sign to a semi tractor-trailer on U.S. 127 and Ohio 73 in Butler County.

The two were pronounced dead at the scene.

Now, three families – one an ocean away – and a local school community of more than 2,200 students are grieving.

Both girls were honor roll students who were well-liked among classmates, their families said.

Mathilde worked two jobs in her native city of Svendborg, Denmark, until she could afford to enter into a foreign exchange program at International Student Exchange. She arrived in August and has spent the past year living as an American teenager, absorbing the culture and fitting in with her host family.

“She wanted to know what America was like,” said Elaine Schumacher, 54, a receptionist at Colerain High whose family hosted Mathilde in their Green Township home.

Miranda attended classes part of the day at the high school and also was enrolled in a health-tech program at Butler Tech in Fairfield Township. She, too, was close with her family and envisioned a life of serving others.

“She was a wonderful person inside and out,” said Miranda’s aunt, Donna Henderson of Florence.

Miranda was driving a Honda Civic when the Butler County Sheriff’s Office says she failed to yield at a stop sign to an oncoming tractor-trailer driven by Steve Fish, 48, of West Harrison, Ind. He was uninjured.

A third vehicle, a pickup, was also struck. Its driver, Edward Schatzle, 61, of Milford Township, was taken to University Hospital with minor injuries.

The crash remains under investigation.

Steve Fish’s wife, Donna, said her husband has been advised by his company not to discuss the incident. But she said he feels terrible about it and tried to stop his truck after the Civic pulled out in front of him.

“He is requesting prayers for the girls’ families,” she said.

Both girls, who were wearing seatbelts, died of internal injuries, said Andy Willis, an investigator with the Butler County Coroner’s Office.

Miranda was en route to her prom date’s house in Oxford. She was going to pick up a permission slip for her mother to sign so she could attend Talawanda High School’s prom Saturday night.

Mathilde went along for the ride.

Miranda’s royal blue prom dress with pink sequins was still at her Colerain Township home Friday. Her family plans to bury her in it.

“She loved blue. It was her favorite color. She just turned 17 on April 29,” Henderson said. “I can’t believe this happened. It is like a bad dream and I am going to wake up and see her face here.”

Miranda was close to her entire family, especially her mother, Cheryl Biehl, and considered her a best friend.

“Cheryl is devastated,” said her cousin Shelley Henderson of Florence.

Relatives said Miranda’s mother, who declined an interview request, knew something was wrong when her daughter didn’t return from the trip or respond to text messages and phone calls.

A law enforcement official arrived at their home at 8:30 p.m. When Biehl saw him at the door, she knew her daughter was gone.

She fit right in with the family, accompanying them on a hiking and camping trip over spring break to Cumberland Falls in Corbin, Ky.

“She wasn’t a foreign exchange student with us,” Elaine Schumacher said. “She was a family member.”

Their youngest child, Maria, 17, was the same age as Mathilde, and the two became as close as sisters. She even called Elaine Schumacher “Mama.”

When sheriff’s deputies broke the news to the family Thursday night, she said she requested that International Student Exchange alert Mathilde’s family in Denmark, where she leaves behind her parents, a twin sister and younger brother.

Mathilde’s international status presents a bit of a challenge. Her body must be held here about two weeks and cannot be flown home until U.S. and Danish officials identify it. Once her body leaves the Butler County Morgue, it will be held at Frederick Funeral Home in Colerain Township.

When services are held in Denmark, the Schumachers plan to attend.

Elaine Schumacher said she spoke on the phone with Mathilde’s mother Thursday.

“They are beside themselves, but she did tell me she didn’t think Mathilde could have been in any better place in America than where she was. She knew she was getting the experience of a lifetime and was thrilled for her daughter.

“I told her how sorry I was and she said ‘Elaine, don’t be sorry. There was nothing anyone could do. We both shared a beautiful girl.’ “

His case takes a step forward just days after a jury handed down a guilty verdict for Markus Kaarma, the man who shot and killed another foreign exchange student from Germany, Diren Dede.

The student filed the suit in Montana federal courts against International Student Exchange (ISE), one of the world’s largest exchange companies, saying the company should be held responsible for placing him with a Belgrade host parent who later sexually abused him in 2011.

His Belgrade host father is also listed as a defendant in the lawsuit.

According to court documents, the student was 16 on December 23, 2011 when he experienced the abuse and reported it immediately to ISE. He left the country four days later.

Attorneys for the host father say the student fabricated these claims because he was unhappy in Montana and wanted to return to Germany.

The student is now being represented by the Missoula-based firm of Milt Datsopoulos. A pretrial conference is set for January 21.

The lawsuit seeks damages in excess of $6 million.

I remind you of US regulations that forbid any form of missionary work.

“In 1994, LaJuan and her husband went on a mission trip to Russia. She repeated the trip five times. During her last visit, a teenage boy with blonde hair and blue eyes lamented that she wouldn’t come back. “They always say they’ll come back, but they never do,” he said. Mrs. Dixon began praying on her way back home that God would provide some way for her to bring those children to our country. Her hope was for them to be introduced to Christianity here, and take it back to their home countries with them. She was asked to work with a foreign exchange program and her mission expanded to include the sharing of cultures. She began working with International Student Exchange in 2012, and at the age of 72, she shows no sign of giving up the hard work. “God is big enough for me to find homes for these children,” she says.”

According to Into Education’s own Wikipedia page and their About pages they claim that the firm DLS was incorporated in the United Kingdom in 1976. I have not been able to find anything that substantiates that claim.

I do not know why details on Into’s own website deviate from the ones in the various commercial registers. I have tried really hard to find substantiation for each of their claims.

1986: In 1986 John Douglas Fisher and Constanze Fisher established Douglas Language Services Limited in England: 02053181: East Sussex. In 1987 its first name change was to Educational Services Abroad Limited. Next name change was in 1988 to Douglas Language Schools Limited. Then it was changed in 1992 to Into Study Tours Limited. In 1994 Into Study Tours Limited is listed as Dissolved.

1997: When Into speaks of their merger with an US firm I think they are speaking of Eurovacances Youth Exchange, Inc. Eurovacances (1439809) was founded in 1990 in New York at the address of 119 Cooper St Babylon, New York 11702-2319 United States. In 1997 Eurovacances changed its name to Into-Edventures Inc. (Craig Brewer). At the same address we find DM Discoveries (Diana Declemente), ASA International (Samuel Gibson) and International Student Exchange Inc. (Wayne Brewer) 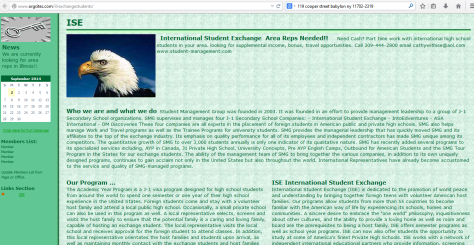 The core of the problems is irresponsibility and profiterring. In most the problem cases, the area rep and the sponsor simply ship the student home in order to shut them up against complaining. There was a case involving a Thai student which just concluded in court in San Diego last year with the sponsoring company being order to pay our a rather high level of damages of about half a million dollars.

I do encourage all problem case parents to collect evidence and bring the sponsoring organizers both in the US and in the home country to court. That is one of the better way of reducing the abuses on the foreign youngers’ fascination about going to school in USA.

Myself have had a very gravely disappointed experience with International Student Exchange Corporation, headquartered in New York operated through a network call SMG (Student Management Group) and INTO (Into-Edventure). the details of which already is available at:  http://groups.msn.com/HowSMGFailedtheStudentExchangeProgram

Some of the earlier blogger would remember, my daughter was shipped back after only 3 months of a 12 month program because she complainedf about the noisy and quarrelsome host family. The host family of course retaliate by charging her $5-700 in telephone fees and accused her of being unsociable illed adjusted, etc. Well, now 3 years since, she is enjoying a lot of good friends back in USA with a scholarship from one of the top 5 universities. She just attended USC football game with a bunch of American friends yesterday.

By the way the name of the sponsoring company in my case was the International Student Exchange Corp of New York. They organ in Thailand had shut down the website, apparently opened under a new name since our case.

In 2009 DM Discoveries (DMD), IntoEdVentures (INTO), and ASA International merged with ISE.

The following is an excerpt from e-mails regarding DM Discoveries’ (now ISE) terrible placement of a Chinese exchange student. Her host-parents were hearing impaired. That led to her having to take care of crying children, both after school and at night. A headache started because of the high noise level from voices and television. Excrement from the children could be found in washing machine, on the floor of the bathroom and the air reeked of urine. The case came to CSFES’ attention September 2008, 3 weeks after the student’s arrival.

…. Second of all, I really like going to Sulphur Spring High and I like the classmates and teachers.

March, this year, I knew that I was assigned to TX and I was aware that the host parents have problem with the hearing and the two girls are cute from the photos. …

However, it is not what we (my family and I) thought after I live with them for about 3 weeks.

Followings are the issues I am having now:

… As a high school student, my purpose is very simply here. To study with local youngster and have good interaction with host family.

… Please help me because no one does but you.

Karen Chiu is in my office this morning …..  Becky Sanderson has told her that she must make a decision this weekend about where she is going to live ….. either in Emory or stay here with her current host family.  Becky has also told the home office that Karen’s sister is very unhappy with her host family in Indiana-and that is not true.  Karen’s sister is very happy with her situation.  Karen’s mom believes that Becky is trying to convince the home office that these two girls are just trying to stir up trouble and that they are “bad” kids.

… Karen is depressed and confused about this whole matter.