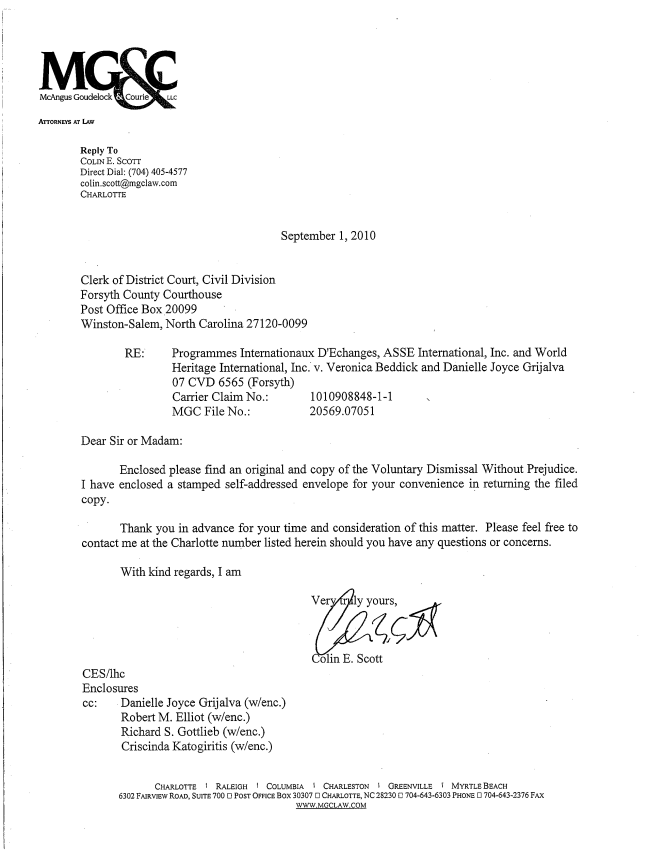 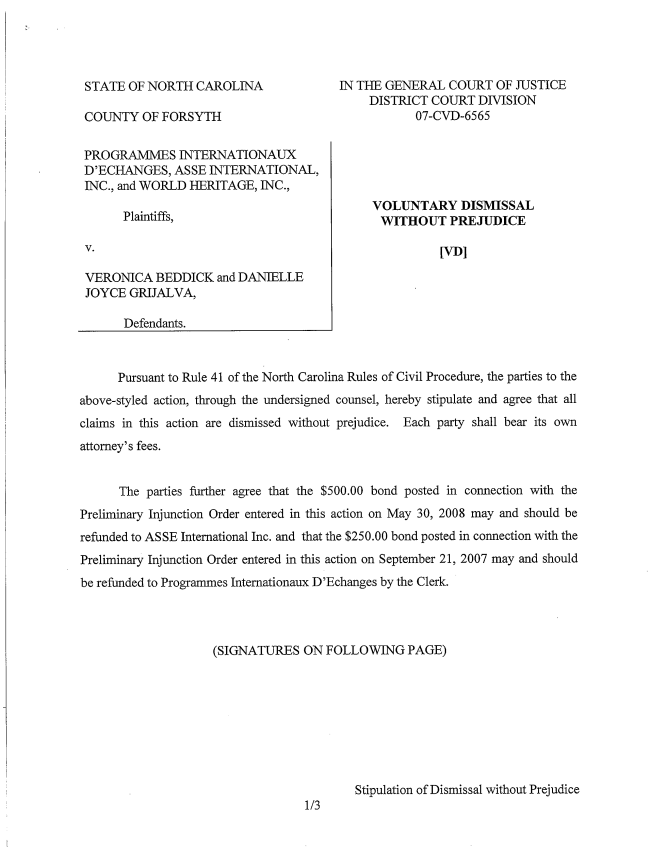 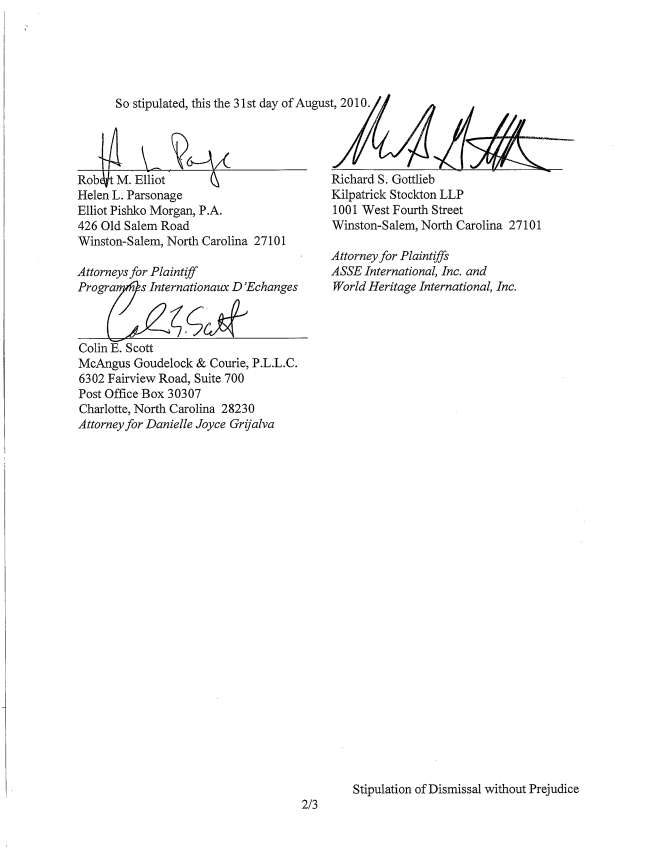 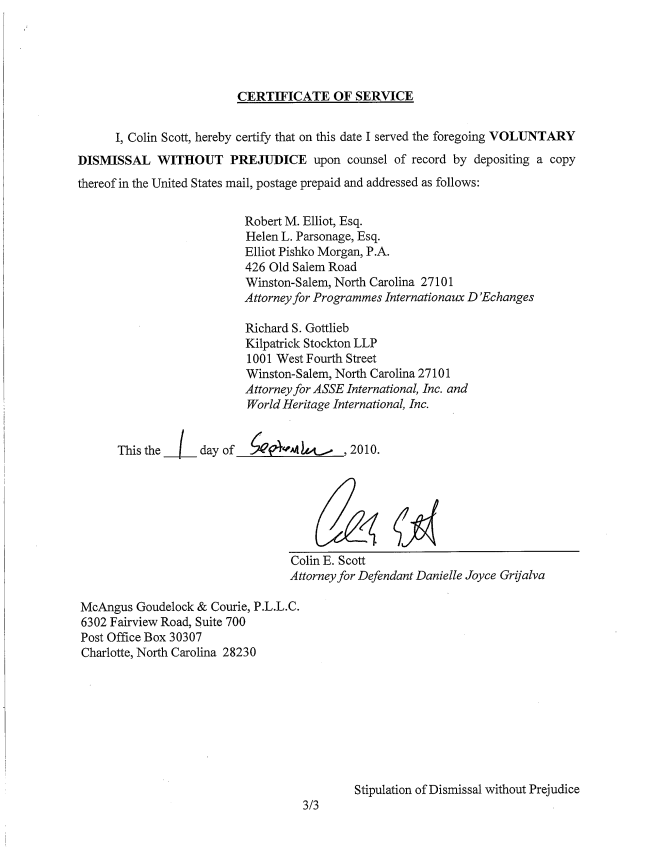 Programmes Internationaux D’Echanges (P.I.E.), a French nonprofit that organizes student exchange programs, filed suit against Danielle Grijalva, director of the Committee for Safety of Foreign Exchange Students (CSFES), over emails and postings on CSFES’s website that criticized the organization’s handling of students. P.I.E.’s complaint asserted claims of defamation, civil conspiracy, interference with contract, and interference with business relationships. The suit also named as a defendant Veronica Beddick, a former employee of ASSE International, a nonprofit that assisted in student placements, alleging that she provided confidential information to Grijalva and assisted in the disputed acts.

In emails and postings to the CSFES website, Grijalva allegedly accused the plaintiff organizations of numerous wrondoings related to their treatment of foreign exchange students.

According to press reports, Grijalva has said that she sent an email to the father of a foreign exchange student at the student’s request but that she has not engaged in any “mass effort” to contact students, their families, or host families.

P.I.E.’s complaint included a request for a temporary restraining order against Grijalva and Beddick. On September 21, 2007, the court granted the request, ordering the defendants to cease communicating with P.I.E. students as well as the students’ familes, host familes, and educational institutions. The temporary restraining order, by its terms, expired after 10 days unless the court renewed it.

On Dec. 12, 2007, the court granted a preliminary injunction against Grijalva that reiterated the prohibition on direct communication with students and others involved with the plaintiffs and further ordered her to refrain from disseminating false or misleading information about the plaintiff organizations via email or her website.

On May 30, 2008, the court granted a near-identical preliminary injunction against Grijalva brought by P.I.E. associates (and plaintiff-intervenors) ASSE and World Heritage, Inc.

OCEANSIDE, CA—A child protection organization is being taken to court by student exchange placement agencies due to efforts to protect foreign exchange students.

Danielle Grijalva of Oceanside, CA, director of the Committee for Safety of Foreign Exchange Students (CSFES), will be in court in North Carolina on May 15 facing student placement agencies, which have obtained a restraining order to thwart her efforts. At issue is whether a child protection advocate should be restrained from reporting incidences of abuse of foreign exchange students.

CSFES is a non-profit advocacy group for the protection of foreign exchange students. A New York teacher allegedly witnessed the physical assault of a French female exchange student by her ASSE International, Inc.  representative and sent a complaint to ASSE. The teacher provided the Committee for Safety of Foreign Exchange Students (CSFES) a copy of his complaint, complete with translated letters from four exchange students who witnessed the assault. The teacher’s complaint was forwarded by CSFES to the Buffalo Police Department, the National Center for Missing and Exploited Children (NCMEC) and the U.S. Department of State.

On Sept. 26, 2007, the ASSE partner in France, Programmes Internationaux D’Echanges (PIE France) filed a Complaint and Motion for Temporary Restraining Order, Preliminary Injunction and Expedited Discovery against the director of CSFES. ASSE and World Heritage, Inc. filed a separate Complaint and Motion for Temporary Restraining Order against the director of CSFES.“Do I believe this is an intimidation tactic?  Absolutely.”  said Danielle Grijalva, director of CSFES.  “Let me emphasize that children’s safety must be first and foremost in foreign exchanges and every other aspect of education.  We want to ensure that visitors to our country enjoy a safe and enriching academic and cultural experience that builds bridges for future collaboration, be it social, educational or economic.”Grijalva remains firm, “Abuse by those in positions of trust will not be tolerated.”  The May 15 hearing will be held at the Forsyth County Hall of Justice, 200 North Main Street, Courtroom 4C, Winston-Salem, North Carolina